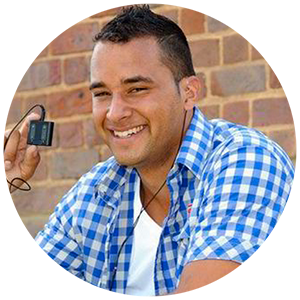 "I first experienced tinnitus immediately after a head-on collision in 2009. I’d never experienced anything like it – it sounded like the continuous clown and girl ‘test card’ signal the BBC used to air."

“I first experienced tinnitus immediately after a head-on collision in 2009. I’d never experienced anything like it – it sounded like the continuous clown and girl ‘test card’ signal the BBC used to air. It affected my hearing – I couldn’t hear the guys I work with or people talking to me, just a short distance away. But the biggest factor was sleep. It would take me a good two or three hours to get to sleep and I’d wake up several times during the night,” explained Nathan.

Nathan was told that his tinnitus was triggered as a result of whiplash. For about a year and a half, he struggled to live with the condition.

"I knew what tinnitus was and that my GP wouldn’t be able to help me."

“I had heard that I could have my ear drum drilled but didn’t fancy that! I was then referred to The Tinnitus Clinic, following a medical, and hoped they might be able to give me some advice.”

Nathan's clinical assessment revealed that he was suffering from high frequency tinnitus, that resulted in him being able to perceive the noise in most environments. He was found to be suitable for the new treatment, Acoustic CR® Neuromodulation.

“I noticed an improvement soon after starting the treatment. I could watch TV and I didn’t notice the tinnitus noise at all” explained Nathan.

“I was amazed that something so small can do so much! I’d put the device on and listen to the beeps for a few hours and then I’d literally sleep all night. It was just like wearing an iPod – but the things you wear in your ears aren’t like normal earphones. They just tuck in and you can still hear other things, so you can carry on as normal, and have conversations and watch TV,” Nathan continued.

Overtime, Nathan’s tinnitus has become less high pitched and he now only uses the device every now and again. Most of the time, he doesn’t notice any tinnitus at all.

“Things are getting better and better. I feel quite chilled out now! I don’t think I realized just how much it was affecting me. People would say ‘you’re a bit moody today.’ Now, I don’t feel anxious or bad tempered at all.”

"I’d definitely tell other people to go for it. It definitely helps. I know you can do relaxation and stuff but it doesn’t actually solve the problem, like the device does."

If your symptoms are similar to Nathan Bushay's, contact us to book your Initial Assessment.