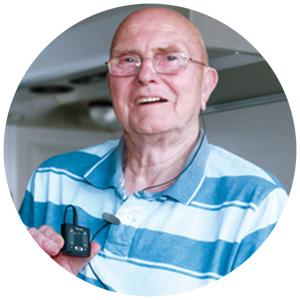 "The tinnitus was a high pitched sound and it was continuous… like when a kettle boils. It was annoying and it caused a lot of problems with me hearing things. I was only sleeping two or three hours a night. It was devastating."

Peter Humphries was one of the first patients treated at The Tinnitus Clinic in Harley Street. He had a 20 year history of tinnitus, which he attributed to a noisy working environment. For years, he had worked as a labourer for a water company repairing burst water mains. Prior to 1974, no mandatory ear protection was required for this job.

“The tinnitus was a high pitched sound and it was continuous… like when a kettle boils. It was annoying and it caused a lot of problems with me hearing things. I was only sleeping two or three hours a night. It was devastating.”

Fifteen years ago, Peter sought medical advice in an attempt to alleviate the condition. He was told that no treatment was available and lived with the condition until summer 2011, when Acoustic CR® Neuromodulation was recommended to him.

After he was assessed as suitable for this new treatment, Peter was fitted with an NTR Neurostimulator device. The device is used to transmit a unique set of tones to the patients’ auditory cortex. These tones enable patients to ‘unlearn’ the tinnitus sound by disrupting the hyperactivity of auditory nerve cells.

"I didn’t really expect it to work but I thought I’d give it a try."

“Once the clinic had assessed my tinnitus, I was given the small clip-on device and earphones. I didn’t need any further guidance; treatment was very easy and, as it was non-invasive, I had no concerns. I simply thought that it was worth a go.”

Peter started using the device for four to six hours every day, as instructed by his audiologist. He first noticed a change in his tinnitus tone after only ten days, and after two months of constant use, he was amazed that his tinnitus tone had become both lower and quieter.

“The volume was lower, the pitch was a lot lower. Everyone noticed it, my wife especially, she noticed the change in my attitude, my concentration and that I wasn’t so miserable.”

The Tinnitus Clinic audiologists continued to adjust the Neurostimulator device to match Peter’s changing tinnitus tone. In November 2011, he was pleased to give the following update:

“The tone has decreased and now I hear little or no sound. During September and October, I had over 40 completely tinnitus-free days and nights. I find that I can concentrate so much more and life is peaceful for the first time in 20 years!”

As the months passed, Peter was able to use the device less often and for shorter periods, while still maintaining the relief from his tinnitus symptoms. In January 2013, Peter reported that he had not used the device at all for ‘two or three months’, but that his tinnitus tone had remained very low.

“My children have all noticed a difference in me. They’ve not said it to me, but they have said it to their mother. And my wife turned around and said ‘It’s because he hasn’t got that noise in his head.’”

If your symptoms are similar to Peter Humphries's, contact us to book your Initial Assessment.