In May this year, Dr Hannes Wurzer a leading ENT physician specialising in tinnitus in Germany presented the findings of an 18 month clinical study of Acoustic CR® Neuromodulation therapy as a poster at the International Tinnitus Seminar in Berlin.

During 2011 and 2012, the 85 patients who took part in the study were assessed at a specialist ENT centre in Germany. These patients had been living with subjective chronic tinnitus for between 2 and 35 years, with a third of them having had the condition for longer than 10 years. 95% of the participants had been unsuccessful with previous treatments, but their tinnitus profile meant that they were suitable for treatment with Acoustic CR® Neuromodulation.

After three months, 38% of the patients had responded successfully to the treatment (showing a six point or greater improvement in their Tinnitus Questionnaire scores). After six months, 52% were responding successfully. At the end of 18 months of treatment, 70% of patients showed a significant improvement. The participants also reported decreases in the loudness and annoyance of their tinnitus.

The chart below shows the reduction in severity of patient’s tinnitus during the 18 months of the trial using the internationally accepted Tinnitus Questionnaire to measure their improvement. 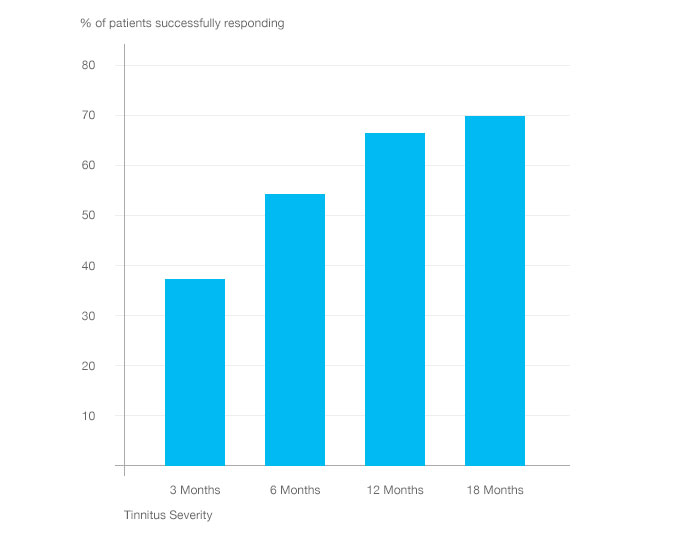 In the UK, Acoustic CR® Neuromodulation is available exclusively from our five tinnitus clinics. For more information about the type of tinnitus that is suitable for this treatment, see our FAQs page or contact The Tinnitus Clinic on 0203 597 4988.