As the only clinic in the UK to offer the Levo® Therapy System for Tinnitus, we are thrilled to announce it has won gold at the 2017 Medical Design Excellence Awards (MDEA).

Levo®’s innovative use of technology has led it to be honoured in the Digital Health Products and Mobile Medical Apps category at the 19th Annual MDEA Awards.

Levo® has been developed by the team at Otoharmonics® Corporation who are based in Portland, Oregon, USA. It is an FDA cleared and CE approved sound-based therapy which works with the brain’s natural plasticity to help the brain get used to, or habituate, to the tinnitus sound within the hearing centre of the brain.

The sound-based therapy, which sees an iPod being approved for use as a medical device for the first time, has already been providing relief for tinnitus sufferers in the US since 2014. 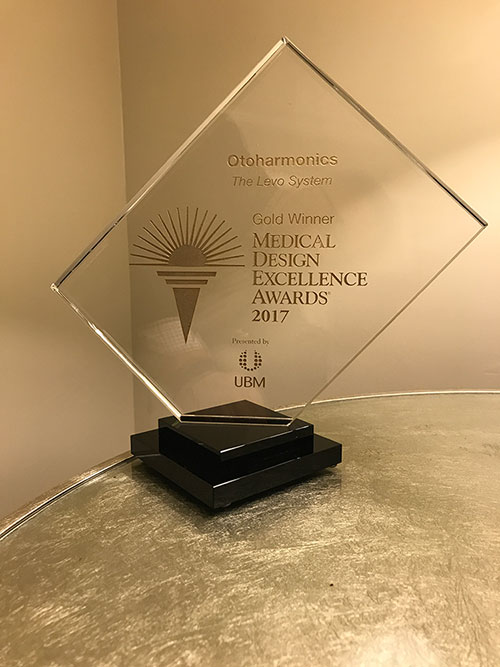 The MDEA is the medtech industry's premier design competition committed to recognising significant achievements in medical product design and engineering that improve the quality of healthcare delivery and accessibility.

The awards program celebrates the accomplishments of the medical device manufacturers, their suppliers, and the many people behind the scenes—engineers, scientists, designers, and clinicians—who are responsible for the cutting-edge products that are saving lives; improving patient healthcare; and transforming medtech.

The winners were announced at a glittering award ceremony in New York.

To find out more about the Levo® System, click here.